Disruptive talent retention strategies was the topic that sparked spirited discussion and debate at the latest HR Connections session. Ideas and past experiences flew around the table about how to change the way human resources professionals think about keeping their best or most promising employees.

Among the topics discussed:

“One of the projects I’ve been spearheading the last five months is a talent identification process,” said discussion leader Nathalie Weister, director of human resources for FOX Networks Group, who leads all facets of HR for the U.S.-based Latin America division.

Weister said the goal of that project is to identify the top 5 percent of talent in her company, and the reason for this project is the challenge many HR professionals face – retention. 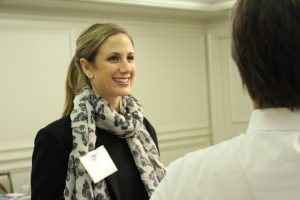 Weister noted the ground-breaking McKenzie study in 1997, when discussing the war for talent. The survey highlighted that only 23 percent of 6,000 executives agreed they were attracting the best of the talent pool. Of that 23 percent, they were only retaining 10 percent. Do the math, and only 138 (2.3 percent) of the 6,000 surveyed felt they were both attracting and retaining the best talent.

“Fast forward (to today)…and employees aren’t staying at their jobs for 20 years,” said Weister, noting a recent study that showed millennials jump jobs an average of four times in their first 10 years out of college. Weister also cited a recent Gallup poll in which 70 percent of employees are either not engaged or actively disengaged at work, and millennials, which make up one-third of the U.S. workforce, are the least engaged of that group.

“I read a SHERM (Society for Human Resource Management) study that says it costs six to nine months of an employee’s salary every time we lose them,” said Weister. “That’s a pretty heavy cost.”

“If that position’s a sales person, (the cost) is worse,” said Cesar Salas, regional HR head at Hamburg Sud for the Caribbean and Latin America West Coast. “It could be $1 million if you made a bad hire.”

Here were some of the ideas discussed to combat these statistics and retain your best talent.

Click here for more information and to register today!

Weister said if they are giving consumers a variety of different ways to consume FOX content, why not apply the same philosophy to employees. Give employees what they want when they want it.

“At Carnival, we really take an initiative to provide a white-glove experience to our candidates,” said Tina Lam, talent acquisition specialist at Carnival Corp., noting that experience extends all the way through to the 90th day of employment. “It’s really giving them that experience and interaction of a world class opportunity here. I think that’s what it really is for us when we’re talking about extension of the customer brand.”

The Importance of Identifying Top Talent Within

“The mere assessment that they are top talent implies that those are the people who will eventually run your organization,” said Orr Rivero, vice president of human resources for Hilton Worldwide, agreeing with Weister’s project to find the top 5 percent of talent already in the organization.

“I like that approach, because at the end of the day, you need to grow those people,” said Rivero. “Ideally, you want to grow them organically. You don’t want to bring them from” an outside source.

Providing That Feeling of Belonging

“Once you get them, it’s not about retaining them, because that’s a defensive strategy,” said Michael Deschapelles, managing director at Diversified Search, offering another way to look at a solution to retention struggles. “You need to find a way to go into engagement and feeling of belonging….Then you’re not playing defense. You’re playing offense.” 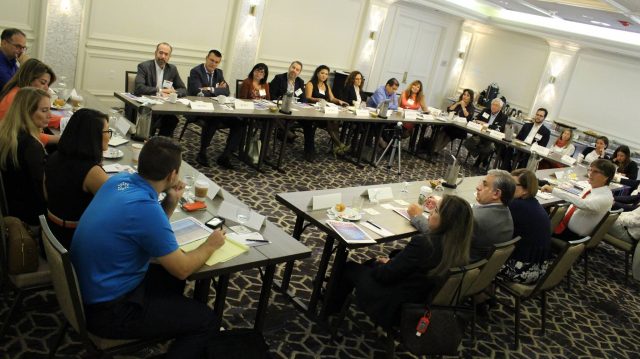 A full round table of HR professionals enjoyed the latest HR Connections session. Click here for the Facebook Photo Album for the event.

What can a company provide to offer employees flexibility, especially for the growing number of young workers who continue to express an interest in travel and/or volunteer work?

Many at this HR Connections session noted an employee often leaves the company because of dissatisfaction with their direct supervisor, and in this growing digital age, that often means a newer employee who has more knowledge than the manager.

“We did a reverse mentoring,” said Rocia Sarabia Gonzalez, HR director for Lexmark International Latin America. “They were specialized in certain areas, and others that wanted to learn from that area. That brought to them a very high sense of, ‘I’m important for the company.’”

“One of the views I’ve tried to express to my HR team is that business leaders transform the business and HR transforms the management,” said Carlos Benitez, head of HR for Latin America at TEVA Pharmaceutical. “Our focus should be that we have better management.”

Thanks to our sponsor for helping make this event series possible: