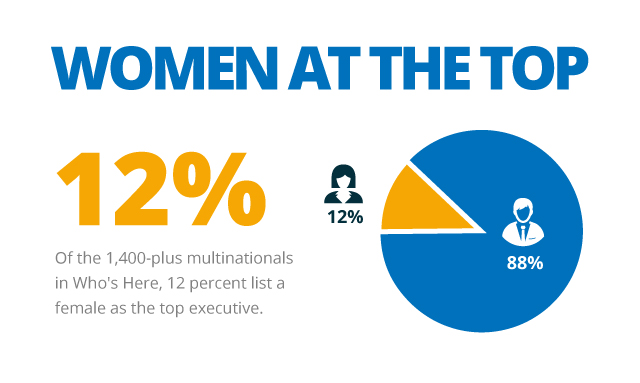 IF THE GOAL IS TO FIND a woman firmly ensconced behind the boss’ desk at 50 percent of the multinationals based in South Florida, then the road ahead is either long and arduous or, if you have a different outlook, one filled with opportunity for those rising through the ranks.

To provide a little context for this closer look of the role women play in top leadership at these multinationals, a little background:

WorldCity’s database includes multinationals from more than 50 nations around the world, representing every continent except one, Antarctica. You can download the annual Who’s Here publication here.

The only "outlier" on the list would be Canada, with nine, or 23.1 percent of its multinationals with a woman in charge

It is for this reason that Miami is frequently called the capital of Latin America.

For this survey, in honor of Women’s International Day, which was March 8, we examined a number of factors beyond the percentage with a woman in the top position: 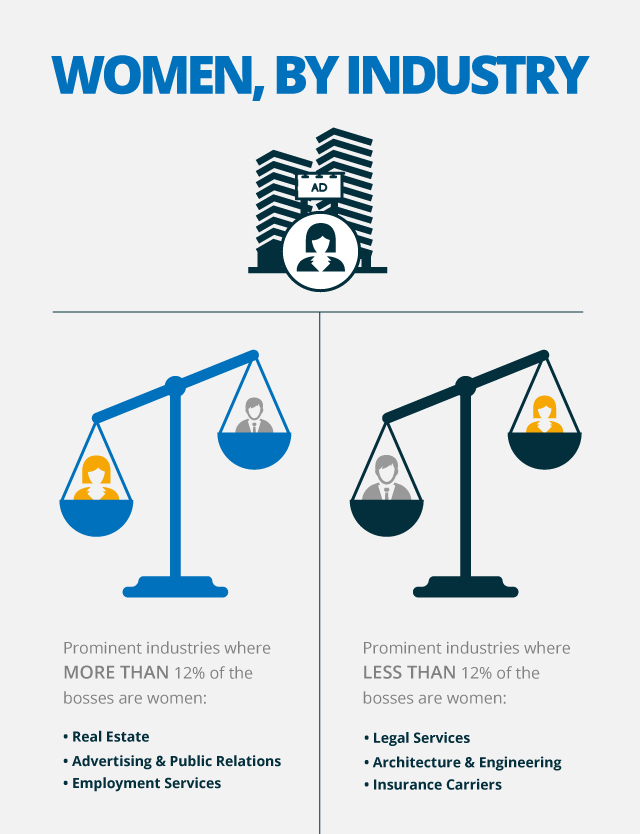 INDUSTRY: Not surprisingly, certain industries are more likely to have a woman in charge while certain others less likely. In looking at industries classifications with at least 25 multinationals, we found that four were particularly below the 12 percent overall average:

None of the 36 multinational law firms in Who’s Here had a women in charge; neither did any of the 27 companies in manufacturing within the chemical, plastics and rubber subsection. Those in the insurance carrier and related activities listed two of 35 companies with a woman in charge, or 5.7 percent. Finally, the category for architecture, engineering and related services had women as the top executive at three of the 44 multinationals, or 6.8 percent.

WorldCity identified five industries with at least 25 multinationals where the average exceeded the overall average of 12 percent.  Among the 34 real estate companies, nine are led by women, for 26.57 percent, the highest total. That would include multinationals like Keller Williams, CBRE and One Sotheby's.

Advertising, public relations and related services have 10 women among the 53 multinationals, or 18.87 percent.  That would be multinationals like Porter Novelli, Young & Rubicam and Universal McCann.

Support activities for transportation/freight forwarding (15 of 87) are at 17.24 percent; and computer systems designs and related services (10 of 63) are at 15.87 percent.

Looking at just those, the only "outlier" on the list would be Canada, with nine, of 23.1 percent of its multinationals with a woman in charge. The United States is slightly below the 12 percent average, at 11.7 percent, as is Spain, at 11.8 percent. The United Kingdom is at 10 percent and the Netherlands is at 5.88 percent.

Joining Canada above the average are France at 16.7 percent, Japan at 16 percent, Germany at 14.3 percent and Switzerland at 13.9 percent.

BILLION-DOLLAR BOSSES: Within the Who’s Here database, we identified four multinationals that oversee at least $1 billion in annual revenues from the South Florida office. Overall, WorldCity has identified more than 60. The four with women in charge, according to WorldCity research: 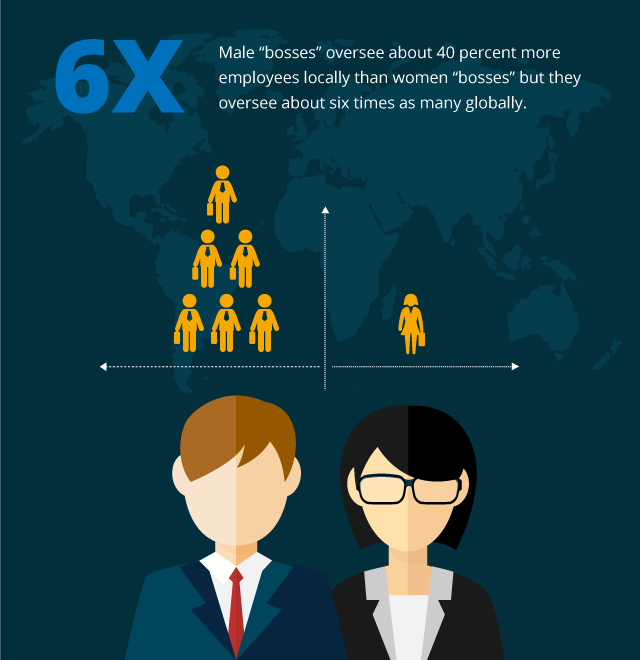 EMPLOYEES: Finally, WorldCity looked at employees. The summation would be this – and it’s not particularly surprising: Women oversee not only fewer companies than their male counterparts but they oversee offices with fewer employees locally and fewer employees globally that are under their supervision.

In case it helps, a quick refresher on high school mathematics: For the average, we divided the total employees managed by the number of companies managing them, first for female-led multinationals and then male-led ones. For the median, we wanted the middle point on the total list of multinationals – where half the multinationals have more employees and half have fewer.

Switching to look at global employees overseen, the average for multinationals with a woman in charge is 92.49 while for those with a man in charge it is 598.04 – almost six times as many. On the median, the respective numbers are 14.5 and 37 – about 2.5 times as many.

SECOND IN SERIES: This is the second in a series of monthly reports from Who’s Here. (Click here to read the first, an overview.) If you did get to this page after receiving a Multinational Minute email with a link to this report and would like to do so in the future, please email sgovantes@45.56.65.150 so we can add you to our list.