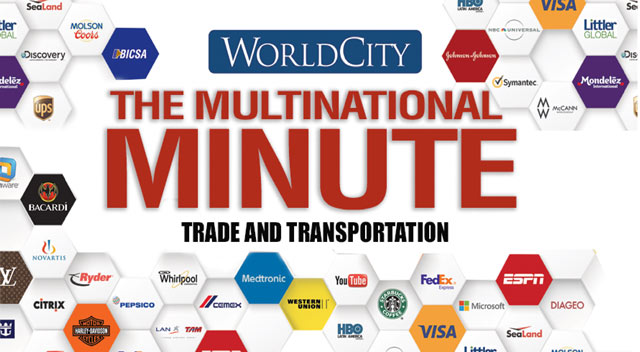 An important part of South Florida’s multinational community is those serving the $105 billion international trade community that is so critical to Latin America, the Caribbean and, increasingly, other parts of the world.

For this analysis, part of a monthly series of reports, WorldCity divided the transportation-related, trade-focused multinationals into four groups: Shipping lines, air cargo lines, trucking lines and the logistics companies.

This is according to research for WorldCity’s Who’s Here directory, a database of more than 1,400 multinationals representing 50-plus nations with an office in one of three South Florida counties – Miami-Dade, Broward, Palm Beach – and at least one office outside the United States.

Here is the representation by global headquarters of the trade- and transportation-related multinationals in Who’s Here:

And here they are by ZIP code:

These lists do not include all multinationals involved in international trade, of course, since there are banks, law firms, engineering firms and other service providers in South Florida’s trade community. In addition, there are hundreds of trade- and transportation-related companies engaged in international trade, whether as distributors, freight forwarders, Customs brokers or others that are strictly domestic and often local. They are not included as part of this analysis either.

But the strong representation of the world’s leading multinationals in the trade and transportation industry makes sense given South Florida’s role as one of the nation’s leading Customs districts and the top one for Latin America and the Caribbean. The three primary drivers of that trade are PortMiami, Port Everglades and Miami International Airport.

A closer look at the four categories follows, although it is worth noting that the lines among these multinationals continue to blur, as air and ocean carriers have in recent years pushed into the logistics space previously dominated by freight forwarders and Customs brokers.

With the logistics multinationals, where all 10 of the world’s top 10 are present in South Florida, eight of them are headquartered in Europe. This list is according to the Journal of Commerce and based on 2014 revenues, the most recent at the time of the 2016 Who’s Here launch. Those multinationals are:

The six top 10 container shipping lines present, with ranking, are:

Missing are COSCO Container Line, China, ranked No. 6; CSCL, China, No. 7; Hanjin Shipping, South Korea, No. 9; and OOCL, Hong Kong, No 10. The list is from Alphaliner.com, based on TEU capacity as of January 2016.

For air freight, looking at the world’s top 10, eight have South Florida representation:

Finally, looking at the top trucking lines, six of the top 10 have offices in South Florida: