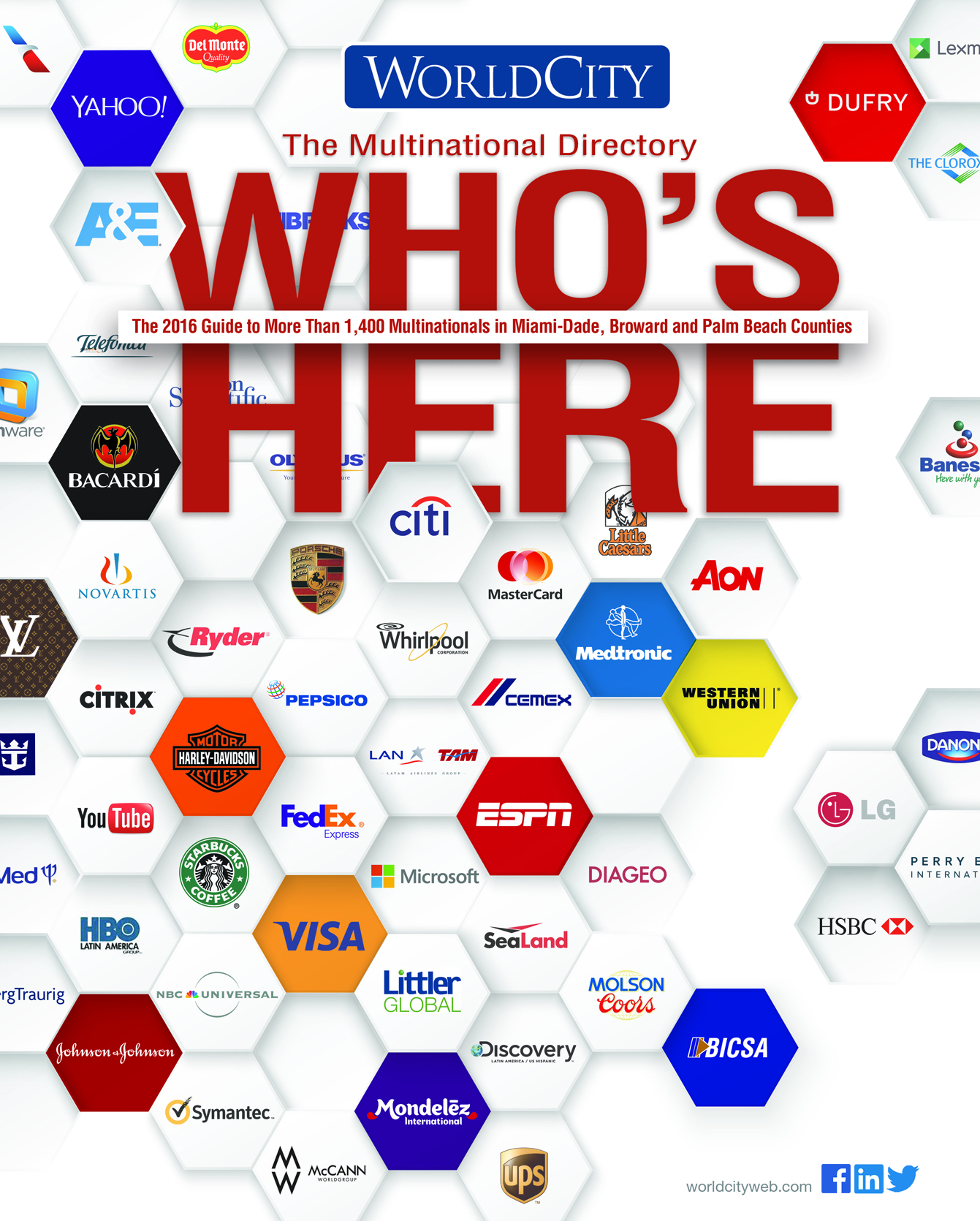 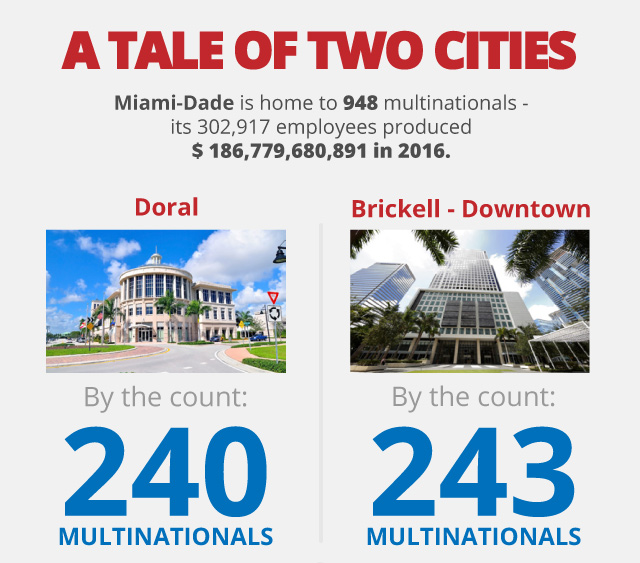 Birds of a feather flock together. The same, to some extent, can be said for multinationals.

When you put a magnifying glass to WorldCity’s Who’s Here database of more than 1,450 multinationals with offices in the Greater Miami area, representing more than 50 nations, one thing is clear: They tend to cluster by profession.

And when they don’t cluster by profession, they tend to cluster near other multiantionals, or at least near Miami International Airport, since so many of them “take a plane to work” almost as often as they take a car. They do not tend to cluster, however, by country of origin.

With this in mind, here, a closer look at five areas with some of the  heaviest concentration of multinationals by location:

Miami’s downtown and Brickell areas, separated by the Miami River, have experienced and continue to experience rapid growth. That means new office projects, new condominiums – and the new and unnerving traffic conjestion one might expect with that much construction.

The law firms include homegrown law firms like Greenburg Traurig and Diaz Reus as well as Baker & McKenzie, White & Case, employment specialists Littler Global, DLA Piper, K&L Gates, Jones Day, Morgan Lewis and others. All are U.S.-based with the exception of DLA Piper, which is headquartered in London, and Ontier, which is based in Spain.

Accounting firms include the big four global brands KPMG, PricerwaterhouseCoopers, Deloitte and Ernst & Young as well as BDO, Grant Thornton and McGladrey and local firm Morrison Brown & Argiz. All are U.S.-headuwartered companies except BDO, which is based in Brussels, and TMG USA and KPMG, both of which are based in Amsterdam.

The international banks are a little different in terms of headquarters because, well, they are international. So the list incluses Banco do Brasil, Banco de Bogota, Banco de Nacion Argentina, Credit Suisse, Banco Santander and Banco Industrial de Venezuela as well as HSBC, Citigroup and Wells Fargo.

On this list, only Citi and Wells Fargo are headquartered in the United States. South Florida’s multinational banks are largely clustered along Brickell Avenue, one of the heaviest concentrations of international banks in the nation.

Doral is a quite different story, though the two communities are not without their interaction. In Doral, the fast-growing city just west of Miami International Airport, logistics and trade are king. While in downtown Miami and on Brickell, they are moving money with keystrokes, in Doral they are moving flowers, cell phones, medicine and more, but with trucks.

Manufacturers – though they do not manufacture in Doral – include Acer, Carrier, Cisco, GE, General Mills, Hyundai, Medtronic, Grainger, Samsung, Welch Allyn and Sony. Wholesale trade – often distributors – would include multinationals like Tech Data, Brightstar and Intcomex, companies that make the Miami Customs district the top-ranked in exports of technology products like cell phones and printers.

These companies tie in with the Brickell and downtown Miami community when they have goods tied up in Customs, when they need trade financing, or if they need help in assessing, for tax purposes, in which country a sale actually occurred. 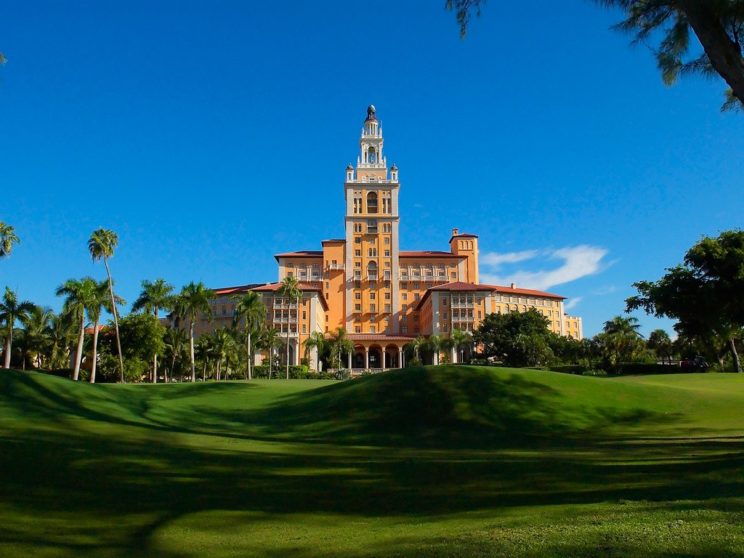 As different as Doral and Brickell/down can look from each other, Coral Gables and Blue Lagoon can look quite similar – at least in terms of the types of multinationals that find their amenities attractive. The one slight difference is Coral Gables will have more overlap with Brickell and downtown Miami – given its proximity to it – while Blue Lagoon will share tendencies with Doral – given their proximity.

Physically, the two are quite different. The former is a traditional, upscale residential community near MIA, a city with a downtown, restuarants, churches, schools and playgrounds, while the latter is an office park that virtually sits in the shadow of the airport, generally more modern with ample parking and self-contained.

In fact, years ago, one of the hotels in the Blue Lagoon area realized residents were parking their cars in the hotel’s parking lot and grabbing a shuttle to the airport to avoid paying MIA parking fees.

Another draw for these two areas is where the boss lives. Coral Gables in particular is easy to reach for any executives living in Pinecrest, South Miami or Coral Gables.

Coral Gables, which decades agho was promoted as one of the rising “world cities” in a University of Hawaii study and which for years proudly displayed along Ponce de Leon the flags of multinationals with an office in the city, is home to a broad range of companies.

There are architectural and engineering companies like AECOM, CH2M Hill, Perkins and Will and RTKL as well as public relations firms and agencies like Fleishman Hillard, Hill & Knowlton, and Ogilcy & Mather. Technlogy multinationals VMWare and Citrix have offices in the Gables as well.

Blue Lagoon also distinguishes itself with some of the world’s best-know brands. Multinationals like Navartis, Electrolux, Caterpillar, Revlon, Johnson & Johnson, WD-40, Epson, Xerox, Elee Lauder, Conagra and Whirlpool all have office in Blue Lagoon. Those are all manufacturers.

Across the bridges and Biscayne Bay into Miami Beach, the multinationals are far less plentiful but they are there because, well, it’s Miami Beach. Nickelodeon and MTV share an office there as does EMI Music Publishing and Warner/Chappell Music. PR firms Ketchum and the Jeffrey Group also have offices on the Beach.

Broward and Palm Beach counties are home to dozens and dozens of multinationals as well, and their presence will be covered in a future story. But more than two in three multinationals in Who’s Here are based in Miami-Dade Country, largely because of proximity to MIA – more often than not, the executives’ transportation to work.